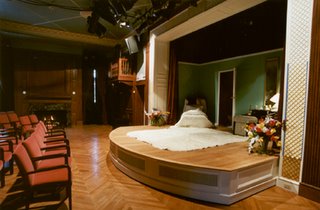 don't be surprised if the titles of my blog entries have something to do with RENT for quite awhile. It may just be the way it is for awhile.

So, the audition last night...since I know you're all dying to know...

I made two very big realizations.

The first realization was and is humorous to me. Let me see if I can even begin to explain. First of all, be aware that I was auditioning for the local community/civic theater. I had NO idea what to explain. Auditions were from 6-9. My friend Eric and I arrived around 6:40 (the notice didn't say you'd have to be there the whole time or anything). We got there and there were probably 6 or 7 young girls in a corner trying to speak one line. There were three groups of girls, all getting older and doing this. I found the director and she said those were the parts for the dancing fairies...which, let's face it, I'm no dancing fairy. Two of those fairies, I later find out, are the main good fairy and the main bad fairy. The girl they're looking at for the main girl fairy is all of 8 and can't read very well... I'm thinking this is strange, to say the least. The other girl was probably 16 and could handle it, although I always pictured the fairies in sleeping beauty as being older than the other people, but whatever...maybe that's just the disney version that I've seen too many times.

So anyway, this is all happening in front of us. like an hour later, they're done with the dancing girls, I've filled out my audition form, and think we're almost ready to go. Not so much. She basically just grabs people out of the audience and makes them read a part, not knowing even who they are. Long story short, I read a part for about 2 minutes. We end and she doesn't know who I am (she being the director). So yeah, it was an adventure. I'm not going to be upset in the slightest if I don't hear back from her...and I wouldn't be overly shocked if I did.

And yes, it was this audition that made me realize I'm a theater snob. I didn't want to, but the whole time I was there I kept thinking "If I was in charge...If I was doing this...This is the way it should be..." that sort of stuff. I was very blessed in high school to have a theater company that could have been professional. Sure, we were all high school actors, but it was run with a degree of professionalism and responsibility that was impressive. This thing last night was almost frightening in the amount of disorganization and confusion and lack of motivation on all parts. I know it's stressful to direct a show. I've done it. But the biggest part of that is at least showing up ready to do it and PAYING ATTENTION to the people that are auditioning!

Even in the midst of all that chaos I realized that I miss the stage so much. Just getting a real script in my hand and looking through it made my heart beat a little faster. Knowing that I could be onstage again made me happy and excited in a certain way that I haven't felt in a long time. I learned so much about myself while I was on stage. I want to be back there again so deeply. I don't know if I can find the words to explain how I feel when I'm on stage and under the white hot lights. It's like a different part of me comes alive when I perform; a part of me that has been lying dormant too long.
from the mind of Emily at 2:18 PM